Umm, No, I Won't Be a Reference for You 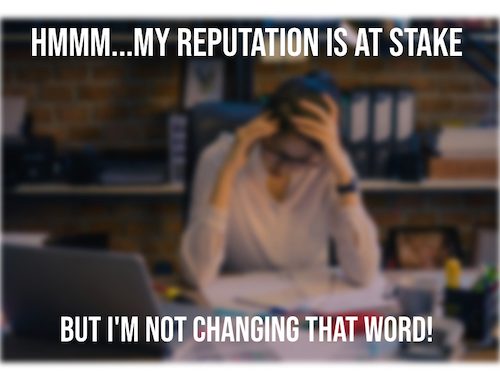 How do you determine who you ask for a reference to vouch for the job you did?

I once hired a writer to work as a contractor. She wrote web copy and worked with stakeholders of the client to collect raw content and turn it into readable and compelling webpages. The project hit a few bumps, like many projects do, but we got through them. The writer seemed to be ok with feedback and accommodated most of it during edit rounds.

Then, at one point, a VP for the firm asked for a few words to be changed during the final review cycle. The writer didn’t make the changes and I asked her why. Her answer was something like “that’s not how people speak” or “it makes more sense the way I wrote it.” Personally, I didn’t see much of a difference.  When the VP saw the revised copy and didn’t see her specific edit requested, she asked again for the change to be made. I asked the writer to make the change.

It’s a webpage, not the Great American Novel.

After about 30 minutes of discussion, I left her office thinking that I gave her clear direction and that she understood — which was for her to make the change because, a) it was the VP of the company who was asking, b) the change was not substantial, and c) it was a webpage and not the Great American Novel.

About 10 minutes later, I saw that she sent me an email saying she “had to leave unexpectedly and would be out for the rest of the day.” The next day she never showed and never called, and we never heard from her again.

About two weeks later, I got a call from a firm claiming to be a potential client of hers and they wanted a reference from me because she gave them my name. I was surprised that this writer thought I’d be considered a person who would give her a good recommendation. And, she never asked me if I’d be open to being a reference. If she had asked me, I would have saved her the trouble, and said no. But she did not.

The questions I answered for this potential firm were basic and then came the usual, “Would you hire her again”? I said no.

Of course, it needed explaining, so I told the truth about the situation. She refused to make a minor edit after being asked multiple times by her manager and the VP of the firm. And that she left us high and dry without any notice. The person sounded surprised, and we hung up.

About a month later, I got another call from another firm asking for a reference for this writer. The conversation went down the same way as the other.

The third call I got made me laugh and wonder (out loud to the caller) why this writer keeps using me a reference after her behavior – I kept the call short and said directly – no, just no.

What was she thinking?

I never got a call after that to be her reference. Hmmm, maybe she was finally on to me?

I still always question, “What was she thinking?” She actually thought that after her behavior that I was going to give her a good reference? Strange.

I’m sure there are wacky stories out there about reference calls, what’s yours? Do you tell the truth on these calls or do you stretch it? Do you outright fabricate something because you feel obligated?

I feel honored when asked to give a reference and am happy to do it. If you need a reference, ask that person first, and discuss with that reference some expected questions and answers.

And if you have walked out on a project and a team before, I would probably think twice before asking them to vouch for you.

Back to the main blog page.

Stay in touch by signing up for our periodic marketing tips email!

Briefly tell us what you're looking for